The F1 United States GP held at The Circuit of The Americas (COTA) is the first purpose-built F1 facility in the US designed for any and all classes of racing and was officially opened on October 21, 2012 by COTA ambassador and 1978 F1 world champion, Mario Andretti.

It’s a nice circuit says Kimi Raikkonen of Ferrari  about the United States GP at COTA.

They put a good design in it, plus it has uphill sections and it’s not just flat. I think it makes it more interesting.

The grandstands, semi-permanent stands and natural seating areas enable over 120,000 fans to attend the Grand Prix at COTA.  2016 proves no exception with record breaking qualifying. 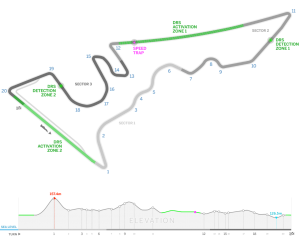